The internationally prized Latvian Youth Choir Kamēr… was founded in 1990 by Māris Sirmais. The choir has won dozens of diplomas, awards, and trophies at a variety of international choral competitions. Both full emotional surrender, a characteristic of amateur singers, as well as the strictest criteria for vocal quality, are of equal importance for the choir. This is expressed in the ellipsis in the choir’s name, Kamēr…, which means “while” in English: while we are still young, anything is possible…

You can now check their full concert on the dedicated youtube playlist.

In recent years, Kamēr… has developed its own commissioned programmes like World Sun Songs, which featured 17 new choral works by world-class composers like John Tavener, Dobrinka Tabakova, Giya Kancheli, Pēteris Vasks, John Luther Adams, Sven-David Sandström and others. Other examples are the cycles Madrigals of Love (2010), Moon Songs (2012), and Amber Songs (2014), in which several celebrated composers wrote choral miniatures on love, the moon, or arrangements of Latvian folk songs, respectively. The choir has won prizes at the Marktoberdorf Chamber Choir Competition in Germany in 1999, three European Grands Prix for Choral Singing in Gorizia (2004) and Arezzo, Italy (2013, 2019), as well as three championship prizes and gold medals at the World Choir Olympics in Xiamen, China, in 2006.

Jurģis Cābulis recently replaced Aivis Greters as principal conductor and artistic director of the choir. Jurģis has held posts as director of the Riga Cathedral Choir School Mixed Choir and of the school’s choral conducting department since 2016, as founder and artistic director of the Carnikava Chamber Choir Vēja balss since 2010, and as conductor of the Riga Chamber Choir Ave Sol since 2013. In 2017, Cābulis was the recipient of the Jāzeps Vītols Latvian Academy of Music’s annual award, and has won prizes at the Jāzeps Vītols International Choral Conductors Competition, the ‘Towards Polyphony’ competition in Wrocław (Poland), and the Juozas Naujalis competition in Vilnius. He has also developed concert programming with the NFM Choir, which is both one of Eastern Europe’s best professional choirs and the resident choir of the Wrocław National Art Forum. Together with Vēja balss, Cābulis has earned awards at several international competitions, including the 2015 Sudraba zvani (‘Silver bells’) competition in Latvia, the Stasys Šimkus Choir Competition in Klaipėda (Lithuania), the Georgi Dmitrov Choir Competition (the European Grand Prix league in Varna, Bulgaria), and the 2019 Tallinn Choral Festival in Estonia. In the competitions in Klaipėda and Varna he also won awards for best conductor.Jurģis listens to almost anything, with distaste only for music that is overly modern or self-involved.
More info on their website.

The concert is included in the registration fee of the passe partout.
Single tickets of the concert can be bought from 2 June 2022 via this dedicated link. It is also possible to by a combi ticket for both the concert by Kamēr… Youth Choir and the closing concert. 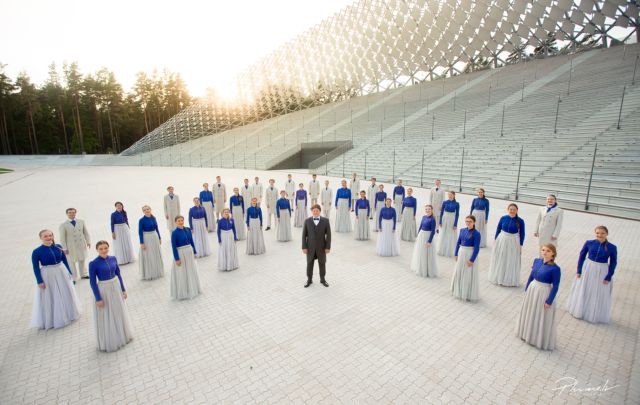